Capturing the bark at Dog Rocks

Would a dog even bother to cock its leg against THAT tree? It’s a crappy old specimen with a few rocks around it. Who gives a rat’s orifice about a place called Dog Rocks at Batesford? 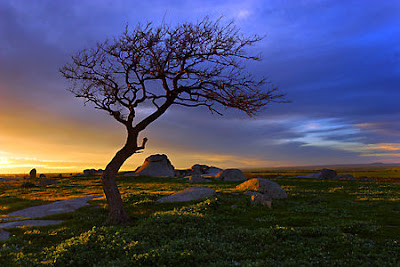 For those in the know, Dog Rocks is an icon. Yes, a photographic icon of Victoria, Australia. Don’t tell anyone though – this is a secret between you and me.

Numerous camera-toting tourists depart each day on buses from Melbourne to visit the world-famous Twelve Apostles. They seek to capture treasured memories in a day. Guess what? The bus drivers don’t deviate off the Princes Highway to show you one of Victoria’s photographic icons. Remember - it’s only a crappy old tree with a few rocks around it. Huh!

Oh, you’re from overseas and you want to photograph THAT tree. What for? You can head for The Great Ocean Road and grab 100’s of quick snapshots in middle-of-the-day lighting. Sounds promising eh?

Go on, buy your daily ticket and head for the remaining apostles that will eventually collapse into the sea. You’ll snap a few keepers and fondly remember your trip. I don’t blame you for coughing up your hard-earned cash. 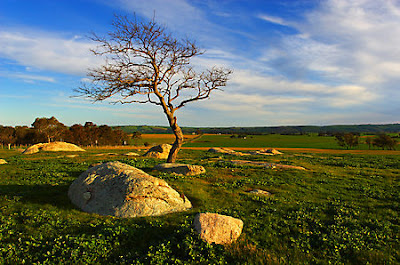 Hey, what about THAT tree! It’s on a bit of a lean don’t you think? Is it going to be standing forever? You want to take a photo of it, too? Don’t bother asking the bus driver to take a detour – he probably doesn’t know where it is.

So what’s the solution if you’re departing from Melbourne? I suggest you hire a car, grab a Melway street directory, and lookup Map 440 A1. It’s as simple as that. But, do it before the termites send THAT tree to god.

Remember to keep it a secret, okay? I don’t want to arrive at Dog Rocks one day and see four busloads of tourists taking photos at sunset!

Posted by Darren Stones at 5:44 pm