For your listening pleasure, click on the play button on the screen. Jimmy Barnes and INXS perform 'Good Times'. Enjoy folks.


Internet communities are growing at a rate of knots these days and people from around the world with like-minded interests are able to communicate in a friendly and harmonious manner. What is it that sets the great websites apart from the others?

The aptly named photography website PassionForPixels, based in Australia and owned by the Melbourne Camera Club, is ably guided by respected and dedicated webmaster, Kevin Power. PassionForPixels (P4P as its members refer to it by) provides a vehicle for photographers from around the world to come together to share ideas, advice and photographs.

Members of P4P are afforded (free of charge) the opportunity to participate in various forums, galleries, competitions and informal get-togethers that are organised by Kevin Power and P4P members. The get-togethers provide the opportunity for many members, who have only ever communicated together online, to meet and share a few stories and quite a few laughs. Of course photography makes up part of a P4P meet and on Saturday July 15 2006, a Melbourne get-together was held due to the initiative of P4P Foundation Member, Rod Connan.

The National Gallery of Victoria coffee shop, located on the mezzanine level, was the location to kick-off proceedings for the day at 10am. Some arrived early, some were dragging their heels and a little mystery surrounded the anticipated appearance of the P4P chat room barmaid, HuskyRose1973 (Sam Cole-Surjan). 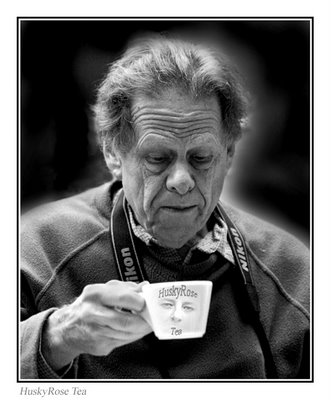 Anyone for a cuppa?

Upon entering the gallery some of us were gently reminded by staff that backpacks were required to be checked-in to the cloak room, as it was deemed they presented a hazard to visitors and exhibits. A little friendly banter with staff and all was sweet. The backpacks were able to be kept in the possession of their respective owners whilst in the coffee shop. I tend to think it was the infectious smile of MB (Mary Broome) that convinced the staff that we were a good looking bunch.

Upon arriving in the coffee shop it was necessary for a little rearranging of the furniture as we were intent on an intimate get-together and didn’t want every Tom, Dick and Harriet listening in on our exchange of ideas.

PerhapsOne (Peter Hammer), who usually does his shopping on a Saturday morning, seemed to be getting a little anxious regarding the whereabouts of HuskyRose, so he dialled her number and found out her approximate location. I’m not sure how PerhapsOne came to be in the possession of HuskyRose’s phone number, however, I’m sure a soon to be police academy graduate will continue to take good care of her. 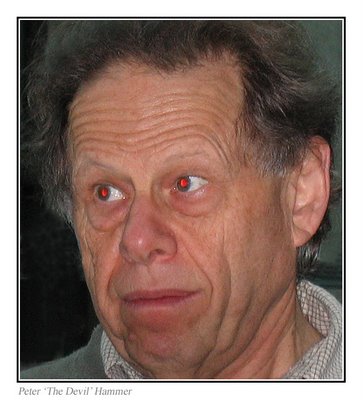 In the lead-up to the day HuskyRose was apparently searching the continent for a baby-sitter so her attendance was always in question right up to the moment of her entering the gallery. Not one for wanting to take an easy ride in on Melbourne’s train network, HuskyRose seemed intent on doing a little zig-zagging around the iconic Melbourne trams. At $8 for all day parking in the gallery carpark, HuskyRose arrived in one piece, without her loved ones in tow.

As usual at these types of get-togethers there was a display of hardware which allowed for a little try before you buy type scenario. Without doubt the biggest pieces of hardware were owned by Nitor (John). What he had to display was truly envied by all in attendance. His equipment (Canon camera and lens) was passed around for everyone to handle and there were some of us who were even able to fire off a burst of mug-shots.

Nitor (John) enjoys sports photography and is a terrific motor sport photographer. He successfully uses panning techniques which capture the speed of a fast moving touring car. Photojournalism type photography also inspires him and he loves capturing images of people where their expressions tell a story. 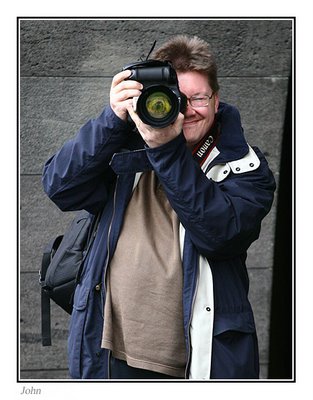 The man with the BIG LENS

snapykg (Kath Gillies) is a devotee of altering images in Photoshop. Changing backgrounds is a specialty and she likes to moves things around in an image. She has a soft spot for photographing flowers and is about to have an image published on the front cover of a local Real Estate magazine. 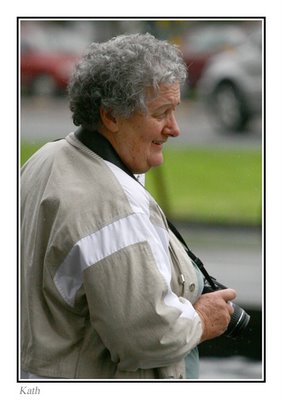 macade (Colin) is a keen landscape and coastal photographer and has produced terrific images from around the Porepunkah and Beechworth area in Victoria. He’s also very capable at capturing quality images of birdlife and old structures such as huts and bridges. Seems to also have a soft spot for sunsets. 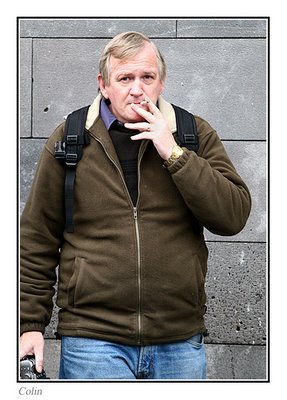 Time for a smoko

MB (Mary Broome) loves to photograph people and her grand daughter in particular. She is very skilled in people photography and is able to capture the expressions exceptionally well. She recently posted a photograph of a plate of chocolate biscuits and I dare say she may have a sweet tooth. 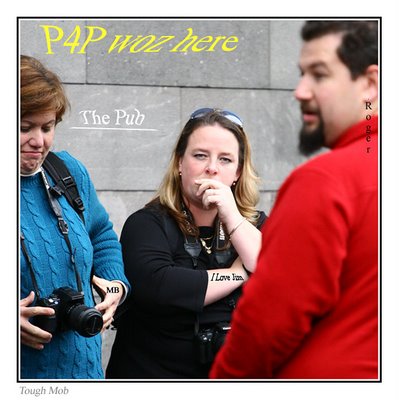 Ausinspiration (Roger Elliot) is an enthusiastic national and international traveller who enjoys capturing landscape images. He recently photographed waterfalls in Tasmania. As a professional photographer, he now has a home studio set-up that allows him to photograph people and he’s also available for location shoots.

rconn (Rod Connan) loves to wander around the city of Melbourne capturing images of architecture and people. He recently posted an image of footpath statues taken in Melbourne and did a terrific post processing job using his image editing program. He’s a real wiz when it comes to the post processing of images. 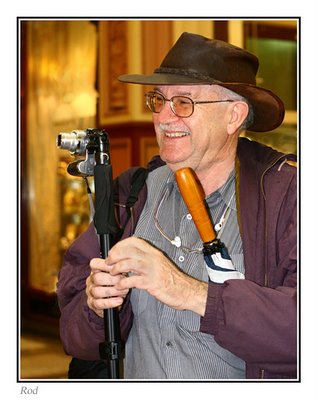 Organiser of the day

bernibabe (Lois) is without doubt one of the stars of the P4P chat room and Rogues gallery. A bubbly and friendly personality who is a dedicated mum and enjoys sharing images taken with her newly acquired camera. Her photographic interests are her kids, flowers, buildings and she is also a very keen blogger. 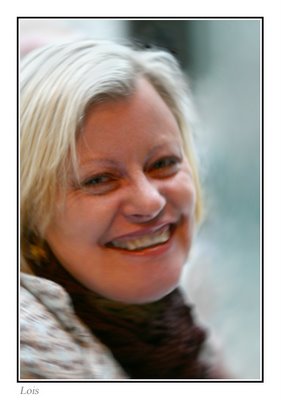 One of the stars from Rogues Gallery

ShaneE1 (Shane) has a preference for intimate landscapes in the Otways and Grampians. He also visits the Victorian high country during late spring to early summer to photograph the wild flowers. He recently produced some terrific shots of Hopetoun Falls and has the knack of capturing movement in the water. 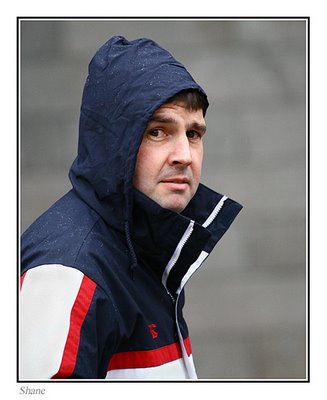 HuskyRose1973 (Sam Cole-Surjan) is a devoted wife and mum. She’s most proud of her hubby who is in training to become a police officer. Her photography is improving very quickly. Her image post processing is excellent and says her favourite photography subjects are her family, flowers and architecture. 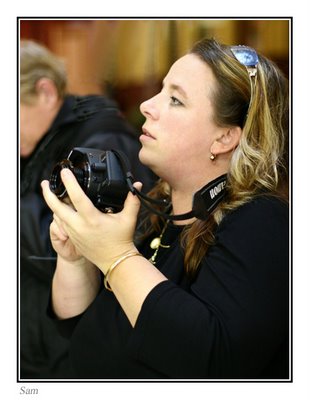 A keen eye on the architecture

PerhapsOne (Peter Hammer) is a very keen photographer who likes to photograph scenes in and around Melbourne. He also travels around Victoria to capture landscapes and is soon to travel to China. Photojournalism style shots capture his imagination and he’s a member of the Southern Suburbs Photographic Society. 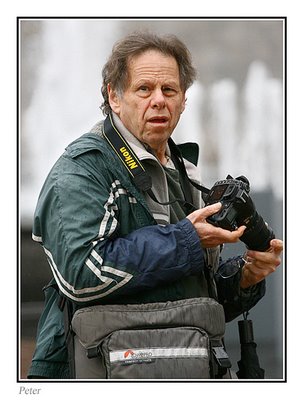 He now has a soft spot for Nikon

The PassionForPixels Melbourne get-together was a terrific opportunity for 11 members to learn a great deal about each other and most importantly it provided the opportunity to make new friends.

Lunch at Southbank afforded us the opportunity to share more ideas and from there it was onto a city walkabout to photograph the sights and the people of Melbourne. A visit to the Block Arcade was instigated by PerhapsOne and it was there that the roaming P4P paparazzi were given the opportunity to capture an obsessive photographer at work. Not surprisingly, it was one from our own group, who will remain nameless – I’ll let the picture tell the story! 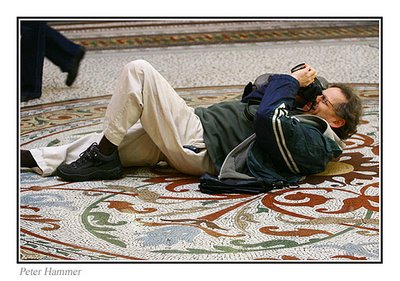 Dedicated to his art

After spending some quality time in the arcade capturing some shots of the obsessive one, it was at this point I became detached from the group. I was totally engrossed in the surroundings and was concentrating on catching some keepers. In a crowded and busy city such as Melbourne it’s very easy to lose sight of people and after a half-hour search I was unable to locate my fellow P4P members. I was hoping they weren’t going to get lost in the murkiness of a grey and raining Melbourne winter day.

From there the group continued to photograph the sights and the people of Melbourne. The images captured from the walkabout have since been a pleasure to view.

It would seem that another get-together is going to be happening sooner rather than later and some members of P4P who weren’t able to make it, may now be inspired to join in the fun and frivolity.

Oh, and of course there were plenty of jibes and light hearted banter. That’s what lead to this day being a roaring success.