Lakes Entrance – a foodie's delight, but forget about the sex

Lakes Entrance in the Gippsland region of Victoria, Australia is one of those places that should not be bypassed. As a regular visitor to the Sapphire Coast region in New South Wales, more often than not I travel from Melbourne and stay overnight at Lakes Entrance en route to Eden or Merimbula. It’s possible to bypass this popular coastal resort town by leaving Highway No. 1 at Bairnsdale and journeying via Bruthen.

My recent visit to Lakes, as it’s affectionately known, was an eye-opener. The town’s iconic timber footbridge, that crosses the Cunningham Arm to the Southern Ocean, is being demolished and replaced with a brand spanking new concrete structure. It’s an exciting development and one which is sure to change the look of the gorgeous Lakes Entrance landscape. 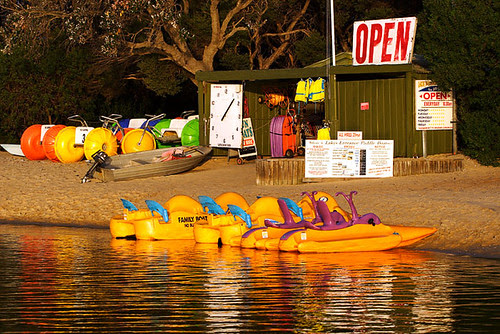 Paddle boats can be hired at Lakes, and recently I witnessed some not so savvy tourists hiring recreational water craft. One bloke, dressed in very swish trousers and shirt, jumped into a paddle ski which was half-filled with water. To say the onlookers were pissing their pants with laughter would be an understatement. Alas, the smartly dressed bloke soldiered on like a trooper and paddled his way out to the never never after figuring out how to use the implements he’d hired. 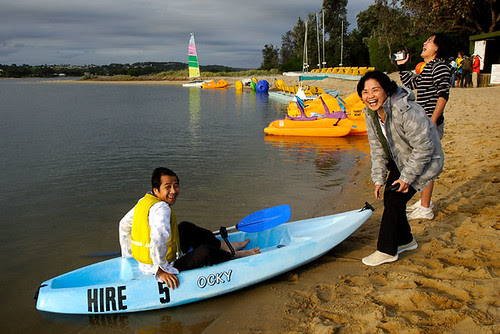 Bronwyn and I meandered over the sand hill to discover a bloke searching for lost stuff in the trampled sand. Using a rather sophisticated metal detector, he seemed intent on finding a gold nugget the size of a small car. Suffice to say, I hung around for a while in case he needed a hand to carry it back to his hatchback. Bronwyn, being a keen fossicker herself, decided to stick around, too, and sweet talk the bloke. Not that we were wanting in on the action in case he found something out of the norm, but all bases were being covered in case he passed out with shock. Anyway, we bombed out – as you’d expect. 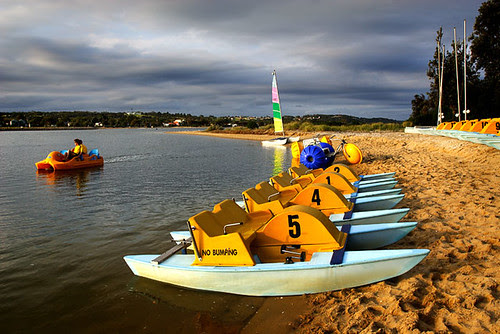 From there we ventured off for some grub. The Lakes Entrance Bowls Club puts on a fair spread for those seeking more than 64 meal options, so we went the whole hog and dined in style. Prawns, booze and bread rolls – just for starters. After all that we got to the mains. We scoffed them off and then waddled our way to the lounge to let our stomachs recover – which they eventually did about an hour or so later.

After a delightful chat about this, that, and the other, we headed back to the Sand Bar Motel and did you know what. Yep, we watched TV until the wee hours.


Posted by Darren Stones at 4:00 pm No comments:

One great thing about this competition is, there's no cost to enter. Entries can be sent via the internet.

The competition will accept entries from residents of the Commonwealth of Australia and its Territories and from Australian Photographic Society (APS) members resident overseas.

I participated in the 2007 and 2008 competitions, and had some reasonable success. I've entered this year, too.

If you're interested, check the website and take particular note of all conditions and rules of entry.

The primary purpose of the challenge is to encourage travel photographers, and travel writers and photographers, who are established in the business, in the process of doing so, or are enthusiasts. As a result of the challenge, Greg Barton, Editor, Australian Traveller magazine will choose a photograph, and a travel article, from the entries to publish in Australian Traveller magazine. Winners will also be rewarded with a 12 month subscription to the magazine. 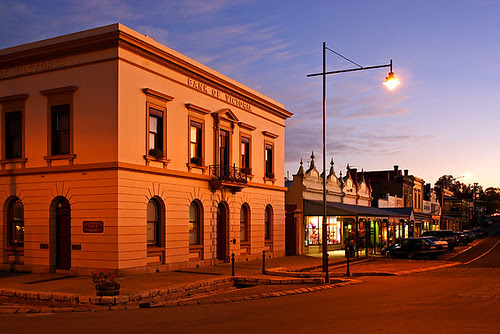 As part of my role in hosting the group, which I originated in December 2008, I promote the group, our members, and works they submit. Also, the group is becoming a portal for editors and publishers seeking quality Australian travel imagery and writing. In recent times, the standard of work has risen and so has member activity. Sponsors are seeing the benefit of being associated with the group as their brand is being advertised across the internet via our base at RedBubble.


So, with all this happening, it seems the group has bigger and better things to come. Further sponsorship has been secured, and new sponsors will be sought in due course. Sponsors are welcome to make contact and can find details via my contact page. I believe the Australian Travel Photography and Writing group is becoming increasingly attractive, and given the brand names associating with the group, it seems a good time to become involved.

Find below a collection of my works available for sale at RedBubble. Hover arrow for more details.

Posted by Darren Stones at 10:21 pm No comments:

Come witness poetry reading by the duelling poets dressed in period costume whilst enjoying billy tea and damper by the crackling log fire this winter at the historic site where famous Australian poet Henry Lawson was born on 17 June 1867. 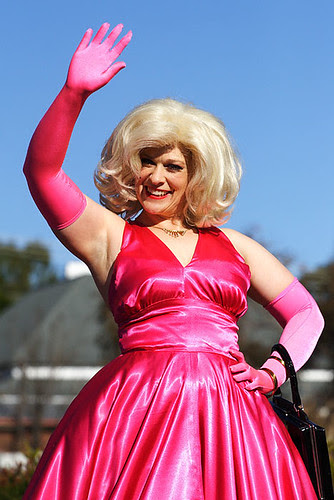 Street performer in the procession during the 2008 Grenfell Henry Lawson Festival of Arts
Photo: Darren Stones

Wood said the benefits of conducting the festival are good for community spirit and it puts Grenfell on the map as a place to visit annually.

“Every friend and family member we have had here for the festival has loved it,” said Wood.

“They think it is amazing that such a little town can put on such a big show.”

Wood, from Grenfell, is on the festival committee that coordinates activities which provides artists the opportunity to exhibit their talent and meet like-minded people.

This year’s official guest is well-known Australian stage and screen actor Max Cullen. Cullen was awarded a Logie in 1984 for best supporting actor in the television mini-series The Last Bastion. He also appeared in the Australian drama programs Skippy, The Flying Doctors, Matlock and A Country Practice. 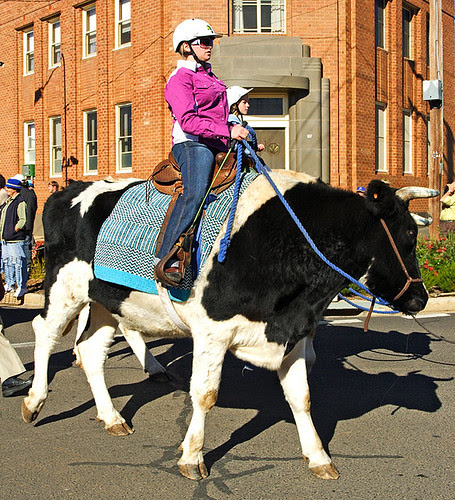 Four bronze statuettes sculptured by Michael Mandelc will be awarded for excellence to the major winners at the awards dinner at the Grenfell Bowling Club on Saturday 6 June, 2009. The winners and their partners will be invited as guests to receive their awards during the entertaining evening. 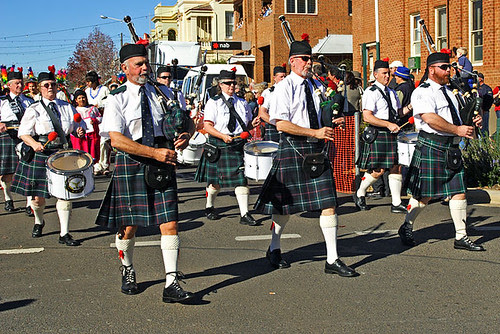 Poetry on the Boards will be at a new venue this year. The historic and well-maintained Grenfell Railway Station will provide poets the opportunity to recite or read poetry to an audience. The scene is destined to be picturesque with wool bales provided for seating, and tea, coffee and scones available.

Wood said the festival is an opportunity for people to come home to Grenfell and catch up with their families and enjoy the long weekend of festivities.

“Most of them bring a friend home with them,” he said.

“With all the people in town, the local businesses do their best trade of the year.”

Whilst visiting Grenfell, discover the attractions and learn of its history. Places of particular interest include; the Henry Lawson Obelisk which marks the site where Lawson was born, O’Brien’s Reef gold mining site which has panoramic views over the township, and the Weddin Mountains National Park. Also, keep an eye out for the giant bust of Henry Lawson located on the roundabout in Main Street on the Saturday. When not in use, the bust is hidden away in an old dusty train carriage at the railway station. 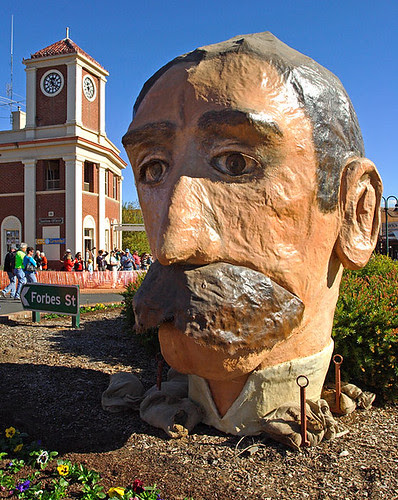 A likeness of famous Australian poet and writer Henry Lawson. This sculpture was displayed in the main street of Grenfell during the Grenfell Henry Lawson Festival of Arts 2008.
Photo: Darren Stones

Accommodation can be scarce during the festival and don’t expect high-class resorts. The centrally located Grenfell Motel is the only motel in town and it offers basic accommodation with 20 rooms that could do with some renovating. The beaut thing about staying here is that it’s walking distance to the local pubs, and the festival procession and most activities are right at the door. 84 Main Street, Grenfell. Phone: 02 643 1333.

Also, the coloured lights that criss-cross Grenfell’s main drag add an element of good old-fashioned charm to the place. Take an evening stroll after dinner to see what I mean.

Grenfell is situated 364 kilometres west of Sydney at the junction of the Mid Western Highway and Henry Lawson Way.

For more festival information, call the Weddin Shire Tourist Officer on 02 6343 2855 or visit the website at www.grenfell.org.au/henrylawsonfestival

New kiosk for the Twelve Apostles

Construction of a new kiosk within the Twelve Apostles Visitor Centre will commence later this year.

The kiosk will complement the visitor centre which was built in 2000 to allow for easy parking and access to the best viewing area. 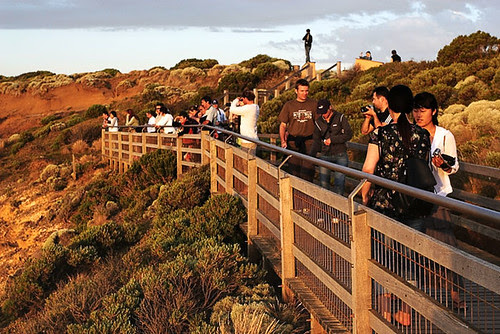 Parks Victoria has committed to directing profits from the kiosk to the People & Parks Foundation, an independent not-for-profit organisation who will distribute profits to programs including local projects. 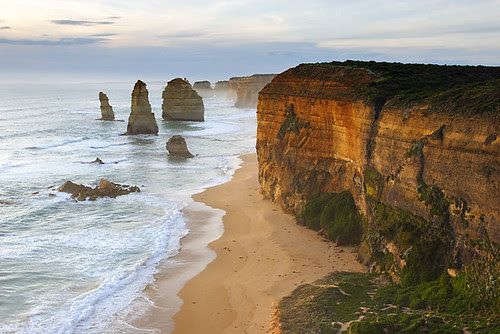 Parks Victoria has undertaken extensive community consultation regarding the proposal to install the kiosk and invited feedback from business owners and community members.

Information sourced from Tourism Victoria
Posted by Darren Stones at 11:47 am No comments: