It's a thrill to have my Cattle Trough - Hay Plains photograph chosen as ADPOTD Photo Of The Day for Tuesday September 22 2009. 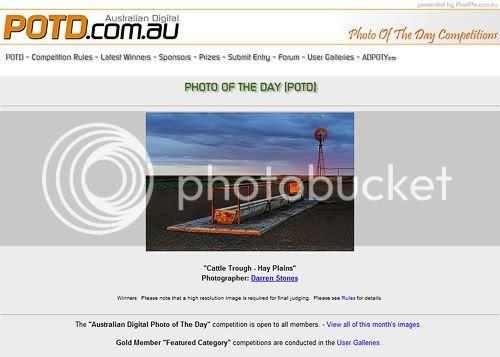 Russell Stewart, owner of ADPOTD, selects one photo as the Photo Of Day each weekday - except during December. At the end of the month, a Photo Of The Month (POTM) is selected and that image is published in Camera magazine and its owner receives a prize of a ThumbsPlus 7 - Today's superior graphics management tool. The POTM is then eligible for the Photo Of The Year (POTY).

Check out the Australian Digital Photo Of The Day website today. http://www.potd.com.au/adpotd.shtml

Cattle Trough - Hay Plains can be licensed directly from me or purchased as a card, matted print, laminated print, mounted print, framed print, canvas print or poster via my sales agent RedBubble. See image here and product details.
http://dgstones.redbubble.com/sets/88190/works/3636709-2-cattle-trough-hay-plains
Posted by Darren Stones at 6:16 am