A photograph of yours truly holding the bronze statuette award for winning the 2008 Grenfell Henry Lawson Festival of Arts Best Photograph of the Exhibition. The winning photograph is 'Dog Rocks'. 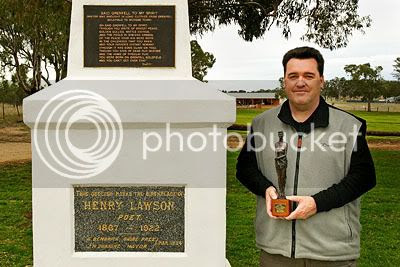 This photograph was taken by my father Gordon Stones at the Henry Lawson Obelisk at Grenfell, New South Wales, Australia during the 2008 festival, which was held during the Queen’s Birthday long weekend in June. The obelisk marks the birthplace of famous Australian poet Henry Lawson.

Thank you to all the marvellous people I had the pleasure of meeting, chatting and dining with during the festival.
Posted by Darren Stones at 4:43 pm