NSW Police report that a man and two boys have drowned at the Tathra Wharf on the far south coast of NSW last night. 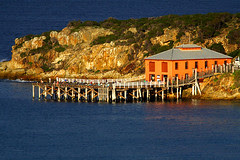 The two children fell into the choppy waters and the man and a local fisherman dived into the waters to assist about 8.10pm.

Emergency services pulled all four from the water unconscious. The man was unable to be resuscitated and was pronounced dead at the scene. The fisherman was revived and taken to Bega Hospital.

The two children were taken to hospital in critical condition but died shortly after.

Circumstances surrounding the incident are not being treated as suspicious.

Witnesses to the incident are being urged to contact Batemans Bay Police Station or Crime Stoppers on 1800 333 000.
Posted by Darren Stones at 7:17 am